You are now looking at an unreleased content page.

There is no known Unreleased Monster at the moment. Please check again when KIXEYE releases an event involved with this type of unreleased content.

This is unknown whether it will even be an ability or not. The supposed ability changes Krallen's appearance, giving the Champion a more spiky appearance into it.

It is unknown what this ability does other than the asthetic change, and whether it will be released/obtainable in the future. 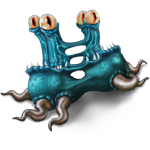 The ability allows Octo-ooze to split into more Octo-oozes once the Octo-ooze dies. It is unknown whether the stats will be changed during the split.

The ability was later reworked for the Monster Slimeattikus, wherein you do not need to unlock it in the Monster Lab in order to obtain it.

Retrieved from "https://backyard-monsters.fandom.com/wiki/Unreleased_Monsters?oldid=28472"
Community content is available under CC-BY-SA unless otherwise noted.