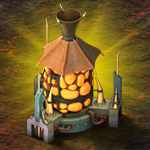 The Town Hall of Inferno, the centre of operations for your hellish fortress, the mighty Under Hall stands tall and proud in your Infernal kingdom!

The Under Hall is, in essence, a Town Hall in the Inferno. It will likewise give a substantial amount of resouces to anybody who breaks past your lines and wrecks your Under Hall. So defending it is vital.

Placement of the Under Hall and surrounding buildings

The Under Hall is nothing to talk about. So now I'll show you how to make a base centred around the Under Hall.

It would be somewhat wiser to place your Resource Pods close to the Under Hall, along with your Compound. This gives you the advantage of harder-to-reach Resource Pods and Under Hall, that will certainly be under heavy CF (cover fire). You can use it to build a UHDT (Under Hall Death Trap), and assuming your yard fits these criteria offered, any Inferno monster should most likely not make it to your Under Hall that easily...

- Spurtz - Let's say it enters your UHDT. It dies because of traps and towers. End of story. They won't get to your compound 'cos its so deep inside.

- Zagnoid - It might target your towers first, but as long as you didn't place your towers in a Big Dumb Bunch the Zagnoids will have difficulty destroying much else. You can consider pathing them to your towers, and keep your towers under moderate CF.

- Malphus - If you've got Resource Harvesters anywhere that is easier for the Malphuses to reach, they will go for the other Harvesters. Assuming they went straight for your UH they die of towers. End of story.

- Valgos - It was invented to rip apart Death Traps. Still you've got a big Compound in the centre to kill the Valgoses with.

- Balthazar - It dies of towers soon enough. Other than killing monsters it doesn't do much, though it has somewhat high damage. It might get to your Pods and UH if it was killing your compounded monsters, but the heavy CF will kill them.

- Grokus - It dies of traps, towers, and maybe compounded monsters. If they go into the maze of traps to reach your UH, they'll die soon enough, though you may die of boredom.

- Sabnox - Will get killed by powerful compunded monsters you should have by the time you get to face an enemy with Sabnox. Will still do a lot of damage to towers.

- King Wormzer - If you don't have King Wormzers or a powerful set of Quake Towers, you're dead. They will rip through your DT with ease, so you can try making a NEC around your base.

Retrieved from "https://backyard-monsters.fandom.com/wiki/Under_Hall/Guide?oldid=27687"
Community content is available under CC-BY-SA unless otherwise noted.