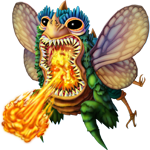 Teratorn is one of the most powerful monsters. His flying ability makes it invulernable to Cannons, Lasers, and even Railgun Towers. When paired up with Zafreeti and a high level Fomor, Teratorn is almost unstoppable; with 10 Million Putty added in, even more so. Teratorn's attack increases greatly when he gets the ability to Bounce his fireballs. But watch out for the enemy's ADTs because that ADTs can easily kill a mob of Teratorns, so try to get rid of them before attacking using Teratorns. You can do this by Catapulting them, which isn't effective against a level 6 ADT with level 4 fortification, or catapulting 10 million Putty so the ADT's would do 10% Damage. You can also use a flying Fomor to reduce the ADT's damage and distract them. It is generally the best idea that the attacker trips all traps in the yard if he or she plans to use an aerial+land-based attacks, because if a land monster triggers a trap of any kind, boom goes your whole land unit, and drop goes your aerial units as well. ( Bolt is a Good Minesweeper once it gets Teleport) With a full scale aerial-based attacks, it is advised that Teratorns be sent in before the Zafreetis do, cos' that would focus the ADT's attacks on Teratorn. Another good idea is to attempt multiple waves of catapulting to at least either destroy or Weaken the ADT's surrounding towers so that your Tower Monsters can destroy the ADT.

Teratorn can not be put into the Monster Bunker, so they can not be used for defending.

Retrieved from "https://backyard-monsters.fandom.com/wiki/Teratorn/Guide?oldid=28176"
Community content is available under CC-BY-SA unless otherwise noted.