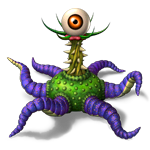 Project X is very much different from the other anti-towers. Having massive damage and relatively low health for tank standards, Project X is certainly a unique specimen. Some of you may be thinking that Project X doesn't fit for the criteria for being an anti-tower Monster, but read this guide, and you might think again.

Project X is an excellent anti-tower monster. When attacking with Project X for the first time, it may seem like a weak monster, but that's only the case if you don't have access to 10 Million Putty and Acid Spores, The victim can say an instant goodbye if you have another Fomor with you.

An alternative method, which is also considerably cheaper, is to send in a group (this does not have to be very large) of Ichis/Crabatrons supported by a Zafreeti so the tower targets the Ichis/Crabatrons first. You then send in a couple of Project X (preferably from another side if you are attacking a splash tower) and watch as they destroy the tower while it shoots in vain at the group of Ichis/Crabatrons. This is very useful for clearing NECs (Never Ending Chains) as found in Donut yard designs, and clears the way for another wave to destroy the harvesters in the NEC. However, you want to be very careful of Booby Traps, as these could decimate your Project Xs if you are not careful.

Project X is an average defending monster. One cool thing about him in the bunker is that he does heaps of damage, but his health does not hold up long enough for him to be able to strike multiple shots. His acid spores make him do more damage, but when destroyed from a distance using Rocket DAVE(s) this ability cannot be used to harm the DAVE(s) unless you can draw them near the Project X.

Overall, Project X is good at defending, but not good enough to compete with other monsters, such as Bandito , Grokus and D.A.V.E. You should use Project X only if the situation calls for it only.Although Project X has a low life , it is a good tower destroyer . Project -X 's low life makes up for it's high damage.

Project X is really good and easy to use for attacking. Send in lots of them, add in the putty rage, and there, the infamous PPX which wrecked anything in its way.

Overall, Project X is something you'd use to attack farm yards.

Retrieved from "https://backyard-monsters.fandom.com/wiki/Project_X/Guide?oldid=28570"
Community content is available under CC-BY-SA unless otherwise noted.