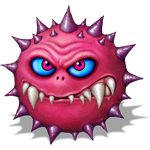 Pokey is the first monster to be received in-game, and the only monster handed to you in the tutorial.

Though people mainly use Pokeys as looting monsters, they can be used for other purposes too, regardless of their low health. They can be used for helping clear out Booby Traps or simply to fill any extra housing space. They are never to be used in an attack by themselves, unless you are using them to knock down a person's Housings and Yard Planner to make them lose monsters and to delay the re-designing of the yard untill their yard planner finishes repairing.

Another great thing about the pokey is it's ability to bait bunkers full of Eye-ras. This video shows how this can be done by an attacker ( Remember, 7 eye-ras can kill your wave completly if you use large monsters, so it is important to bait them.). You can also use them in a Pokey bombs where you fling all the Pokies you have at the same time and if you have too much putty, drop 10 million of it on the monsters.

Pokeys are sometimes used inside the monster bunker because that they are cheap to make and cost little putty to transter into the bunker. It's advantage is that it will continually slow down and damage the oncoming Monsters . Even if it simply stalls them, defensive towers will still fire at them, causing damage. They can wreak plenty of havoc by stalling a PPX attack by delaying the Putty phase .

Retrieved from "https://backyard-monsters.fandom.com/wiki/Pokey/Guide?oldid=29136"
Community content is available under CC-BY-SA unless otherwise noted.