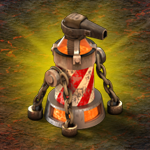 The Magma Tower is a fast-firing tower that targets one monster and constantly shoots at it until it is dead. It does a decent amount of damage every shot, but it has low range, and can be taken down by a small mob of monsters.

It will take some time and effort to get your Magma Tower upgraded to a good level, but if you do, it will help greatly in defending your base. Place a durable building(Resource Gatherer)in front of the Magma Tower to be a decoy, so that it can attack monsters that target anything. They will be busy attacking the decoy building while the Magma Tower fires away.

Retrieved from "https://backyard-monsters.fandom.com/wiki/Magma_Tower/Guide?oldid=26279"
Community content is available under CC-BY-SA unless otherwise noted.