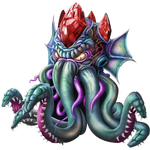 Note: The info in the guide is based on the known stats and behavior of the monster, and might not be accurate.

Grokus tends to attack resources first, so using him to loot from Kozu is fine, though I would prefer to attack with D.A.V.Es.

Using him as a durable minesweeper is also feasible, as he can blow quite a number of traps before he succumbs to his wounds.

Due to its comparatively lower housing space to damage or health ratio, it is much more useful than its little brother, Malphus, and can withstand enough of Laser Towers and Cannon Towers. He is close to a mix of a Crabatron and a Brain, a truly irritating combination.

You can consider placing him in your Compound underground. His high health prevents most enemies from downing him quickly enough, and he is also not vulnerable to the continuous lure technique due to his poor speed. Unfortunately, in the Overworld, Grokus' poor speed does not allow him to react quickly enough to ranged invasions, especially when Sabnoxes are being used. And in a Zafreeti battle, Grokus can't do anything. Using him as a delay is not as effective as using an army of Slimeattikus or other tanks due to Grokus' relatively higher housing space. Also, following a general consensus that defensive tower monsters and looters make poor bunker fighters, Grokus is all the more not suited to bunker work as it has the traits of both kinds of Monsters.

Retrieved from "https://backyard-monsters.fandom.com/wiki/Grokus/Guide?oldid=28175"
Community content is available under CC-BY-SA unless otherwise noted.