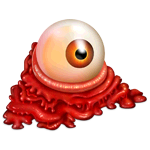 Eye-ra is a must-unlock. The idea of kamikaze on the walls sounds cheap, but it can be a valid tactic, lots of bases rely on pathing to make them effective. But be careful, some bases have blocks spaced out on the outside of their base to protect them form Eye-ras. Once an Eye-ra runs out of walls to explode, they will go for the nearest building and explode. Recommended on Yards with no walls. After a while, they will start losing value of explode yards, as people will have walls. Once you have Map Room level 2, you can restore Eye-ras' glory by exploding Outposts with no walls. Be careful about where you fling your Eye-ras, though: They don't loot, so use them only near defensve buildings. The new monster, Valgos, destroys walls without kamikazing, but is vulerenable to damage when they're attacking the block.

This Monster can also be used as a Bunker monster, for it can explode on D.A.V.E.s and kill in one shot, making Zafreeti useless. NOTE: Using Eye-ras in the Monster Bunker may be effective, however, it is prone to failure, as some people fling in a few pokeys near your bunkers to see what you have in your bunkers, and if they see you have eye-ras in your bunkers, they can easily fling in 1 Pokey at a time, using up all your eye-ras, so use at your own risk. Putting enough D.A.V.E.s in the bunker can stop people from using Pokies to bait your Eye-ras and placing your Bunkers in an unbaitable area is a good strategy too. Marilyn Monstroe can also kill Eye-ras within seconds. You may need to log in often to replace the Eye-ras if you are often attacked because Eye-ras are quick to death if you are attacked often. It is recommended at you should USE them in Brukkarg War to make it easier because he's best monster in the Bunkers. Eye-ra's Airburst is powerful enough to kill Zafreetis, Balthazar,? Vorgs and Teratorns. Multiple Eye-ra's with Airburst can even kill a Fomor.

Retrieved from "https://backyard-monsters.fandom.com/wiki/Eye-ra/Guide?oldid=28036"
Community content is available under CC-BY-SA unless otherwise noted.