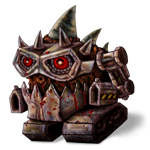 D.A.V.E. is the last monster to be unlocked in the Monster Locker, so it is the strongest non-champion monster in the overworld. D.A.V.E. is very versatile and can fulfill many roles that are played by other monsters. He can destroy bases with Zafreeti or Fomor. He can act as an anti-air unit, a tank, a damage dealer, or even a Silo Death Trap sweeper. D.A.V.E. meaning tribute to the creator or otherwise Destroy all Visible Enemies, Dumb and Very Evil etc.

Dave is also very slow so he needs buffs in order to survive long without buffs he is dead within a couple of minutes.

Dave is an efficient monster. It is best used with Zafreeti and Fomor, This tactic can destroy most bases in 1 attack. (Remember though, most bases need to be taken down in at least 3 attacks.) When Daves gets rockets, he can avoid a lot of traps in a SDT, making him very useful. Due to their high health, they can actually be used alone on weak bases. With it's rockets to level 3, it can outrange Laser Towers and level 1-6 Cannon towers. In a yard with no ADTs, Dave, Zafreeti and Fomor can destroy everything without trouble. Zaf + Fomor can actually survive an ADT for a long time, giving the Daves enough time to destroy the ADT. Or use 10M Putty. The rocket ability of Daves' allow them to bypass SDT, allowing them to loot without worrying about traps. Look out for bunkered eye-ras if you don't have a Fomor, as they can easily kill a Dave. Using 8 D.A.V.E.s and 6 Zafreetis are very effective for attacking and can easily destroy the bases. Unless you are in a goo crisis, spawn them in your Hatchery! Their low speed is even efficient here- they can go together with Zafs.

D.A.V.E.s are the best in bunkers, They are like a tank in them. It's impossible to beat them without the use of a Zafreeti, Daves and Eye-ras. Their rockets make them even more frustrating. Ever had problems with Teratorn WM raids? Put them in the bunkers (remember, it takes putty to load a bunker, so place your bunker monsters wisely), use some backups like pokeys or lower level monsters so the player who are checking the bunker then they would not know that their are more D.A.V.E.s in your bunkers.

Retrieved from "https://backyard-monsters.fandom.com/wiki/D.A.V.E./Guide?oldid=27665"
Community content is available under CC-BY-SA unless otherwise noted.