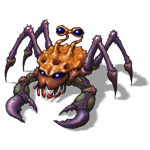 Crabatron has nothing really special into it. Well sure, it has pretty high health, but is pretty much outclassed by many Monsters at higher levels, a lot of Monsters outclass it by a mile. Crabatron can neither be useful for attacking nor defending. This poor Monster does not get the buff it needs to be effective. Read the guide and see.

D.A.V.E., Project X, the new Rezghul, and even Zagnoid outclass this Monster. Due to this, I do not recommend using it at higher levels. These Monsters are the reasons why:

Well, its pretty obvious why this Monster outclasses Crabatron by a mile. First, it has ridiculously high health, having a massive 21,000 health at level 6. Second, It has massive attack damage. Having 1,900 health at level 6. And, it targets anything, which means it can be used multipurposely.

Both Crabatron and Project X are tower-targeting Monsters. Although their stats are extremely different when compared to each other, Crabatron having a more defensive quotient, while Project X has a more attack quotient, Project X is far better than Crabatron, because Project X is pretty easy to use. A group of Project X with 10mil putty (PPX) can easily obliterate a base with lots of time to spare, while a 10mil puttied Crabatron army can't.

Rezghul is a new Monster for the backyard universe, and a very good one indeed. Like Crabatron, Rezghul targets towers, but Rezghul has superior health, far superior damage, and characteristics Crabatron doesn't have, like long-ranged prowess, and of course, Reanimation. Although Rezghul is far more expensive than Crabatron, it is worth the goo.

Zagnoid Zagnoid has much less health Crabatron, but believe me, this Monster is much better to use than Crabatron. Why? First, Zagnoid, when level 6, has nearly as much health as a level 1 Crabatron, and has the same damage but doubles when attacking towers. Second, Zagnoid are cheap and quick to produce. Having only 15 housing spaces and costing only 7,500 magma at level 1. Zagnoid is much more plentiful and better to use.

Crabatron is pretty horrible to use for attacking, really.

Crabatron is only used to distract towers, but D.A.V.E does it better, because of higher health and higher damage. When putty raged, a group of Crabatron can destroy just a bit of a well defended yard, due to its poor damage and health not satisfying enough. Poor Crabatron easily dies.

Bunkers are also a threat for Crabatrons, Balthazar, D.A.V.E, Eye-ra, and King Wormzer are just a few kinds of Monsters that will kill Crabatron easily.

In conclusion, Crabatron is pretty useless for attacking due to so many faults and threats.

Crabatron can be purchased with 14 shiny for your bunker. They can be sold for 40 shiny each if you are below Level 30.

Putting Crabatrons in the Bunker is a stupid idea, because of their high health, they are able to create giant sinkholes which damage your base's monsters off for a moment, while other towers strike at them. Crabatrons are really useful monsters when defending It is also an good idea for some Outposts.

Crabatron needs better stats. Its health is nothing Compared to the mighty D.A.V.E or the terrifying Rezghul. Crabatron is poor in attacking, mediocore in defending. The only good use of Crabatron is to feed a Gorgo, no offense.

Retrieved from "https://backyard-monsters.fandom.com/wiki/Crabatron/Guide?oldid=28568"
Community content is available under CC-BY-SA unless otherwise noted.